We are all familiar with cereal. The breakfast meal is usually made of processed grains. It is commonly eaten with milk,  yogurt, fruit, or nuts. Right now, the most popular cereal are the ones with added sugar, creating a debate on whether it is a healthy breakfast option or not.

Despite all that, cereal has long been one of the most popular breakfast choices. While associated with children’s breakfast, there are still a considerable amount of adults who consume cereal.

With its practicality, it’s not a surprise that people choose it as a quick breakfast option. Especially when you can just pour milk and enjoy your cereal. As expected, 87.9% of the respondents consume cereal with milk instead of on its own.

However, cereal is not strictly only breakfast food. 45.5% of our respondents admitted that they use cereal to hold back hunger while 42.2% said that they choose cereal to eat as a snack. Interestingly, 21.2% admitted that consuming cereal has become a part of their daily habit. 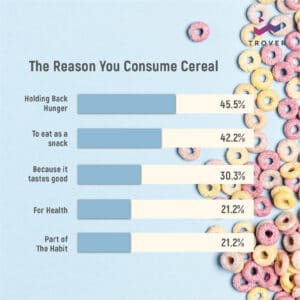 Bet You 5 Dollars That We're Worth A Zoom